Small museums in Washington DC offer an alternative to the crowds that you find in the large museums in Washington like the Air and Space Museum or the Natural History Museum. Small museums like the Phillips or the Kreeger offer a chance to see more of the DC area than just the Mall – and to try some local restaurants rather than just the cafeteria food and food trucks! Make some time to visit some of Washington’s very special small museums. Here are a few to get you started.

The first of my favorite small museums in Washington DC is a short walk from the Dupont Circle Metro station. The Phillips has the distinction of being the first museum of modern art in the United States. When you visit, you will see classic impressionist painters like Renoir and Matisse and more contemporary artists like Hopper, Braque, David Smith and Thiebaud.  There are lots of great places nearby to have lunch, including at Kramer’s bookstore on Connecticut Avenue

Washington DC is filled with homes of famous people, but the Woodrow Wilson house at 24th and S Streets, in Kalorama is worth a visit. This is another of the small museums in Washington DC that you will find in the Kalorama area, so it is a good choice to combine with a visit to the Phillips.   Wilson and his wife retired to this property on S Street in 1921, after leaving the White House.  Wilson died in a bedroom upstairs in early 1924.  The house is preserved to 1924, so that you have a sense of how Wilson lived in it.  According to the property’s website, the National Trust opened the doors of the Woodrow Wilson House to the public in 1963, examining the impact of his consequential presidency and, more recently, taking an honest appraisal of Wilson’s triumphs and shortcomings. 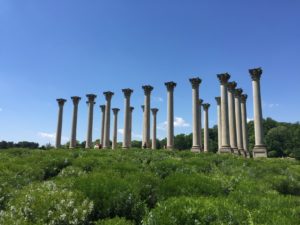 Not all the small museums in Washington DC are indoors.  The Arboretum gives you a chance to escape the noise of Washington DC and visit one of its most beautiful gardens.  Check out the bonsai gardens, the azaleas and dogwoods, and more. As a “living museum,” the National Arboretum features more than just trees and flowers. It also offers a look at the original columns of the old East Portico of the U.S. Capitol.  If you have children or pets with you, they will no doubt welcome the chance to run off some energy.

The Old Stone House in Georgetown

This is the oldest unchanged building in Washington DC., dating to 1765, before the Revolutionary War. When it was originally built, it was both a home and a shop for cabinetmaker Christopher Layman. The house reopened as a museum in 1960, offering visitors a glimpse at pre-Revolutionary architecture and furnishings. The museum is free.  Besides the Old Stone House in Georgetown, you will probably want to see some restaurants and shops in Georgetown.  You might check out 1789, a restaurant closer to Georgetown University (named for the year that Georgetown University was established) or perhaps Martin’s Tavern on Wisconsin Avenue, where  it is said that John Kennedy proposed to Jaqueline.

Lincoln’s Cottage is another example of small museums in Washington dedicated to a former president. For over a quarter of his Presidency, Abraham Lincoln lived on an uplifting hilltop in Northwest Washington, D.C., while making some of his most critical decisions. While in residence at the Cottage, Lincoln visited with wounded soldiers, spent time with self-emancipated men, women and children, and developed the Emancipation Proclamation. The human cost of the Civil War surrounded him, undoubtedly impacted his thinking, and strengthened his resolve to challenge the status quo.  President Lincoln’s Cottage is also a National Monument, a National Historic Landmark, and a site of the National Trust for Historic Preservation. It is operated via a cooperative agreement with the Armed Forces Retirement Home and the National Trust.

Located at 140 Rock Creek Church Road NW, the LIncoln Cottage is close to Catholic University and the Shrine of the Immaculate Conception.  You can combine a trip to the Lincoln Cottage with lunch in Brookland at Busboys and Poets!

Posted in: Lifestyle, Things to Do with Kids
View All Lifestyle Posts