The newest addition to the art museums in Washington is the Rubell Museum DC, related to the Rubell Museum in Miami. The new Rubell Museum DC welcomes visitors through a beautiful glass entryway that leads to an open space with wall-to-wall works of art. Sunlight streams through giant windows, creating grid patterns that warm the rooms. The space is understated yet bold, with white walls contrasted by art emphasizing bright colors and sharp designs. Totaling 32,000 square feet, the museum preserves the original layout of the historic school.

What were once classrooms and teachers’ offices have been transformed into galleries with artwork that provides perspectives, insights, and commentary on contemporary ideas and issues. The adaptive reuse of the building also retains the school’s 4,000-square-foot auditorium, a sweeping space for the presentation of ambitious, large-scale artworks and performances. The museum’s new glass pavilion entrance will feature a bakery, bookstore, and terrace that will serve as a beacon for the community. 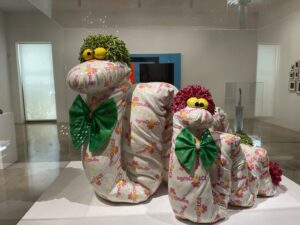 Dedicated exclusively to contemporary art, the Rubell Museum DC reinvigorates the 1906 building of the former Randall Junior High School, a historically Black public school in Southwest DC that ceased operations in 1978. The Rubells want the converted schoolhouse to feel like a neighborhood museum — the $15 admission fee is waived for D.C. residents. (The privately owned, publicly accessible museum is open Wednesday through Sunday.) And while they welcome the work of local artists, the Rubells will not necessarily emphasize geography.

Don and Mera Rubell have been actively collecting for more than 50 years. They first started collecting art in 1964, soon after they were married. Mera was a Head Start teacher and Don was in medical school. They designated a modest amount to collect art ($25, a quarter out of Mera’s weekly teacher’s salary). The limited resources they had available at the time led them to focus on newer and unknown artists. Since the beginning of their collecting days, the Rubells collecting practice has followed a distinct intuitive method, and their funds have come from the family business (Don is a retired gynecologist who ventured into the boutique hotel and real estate business (Rubell Hotels).
The Rubells collecting style has remained consistent throughout the decades and has set them apart from other high-profile collectors. Before acquiring a piece, the couple usually makes several studio visits seeking to establish an emotional connection with the artist and their work. If they are captured by the work, they tend to acquire more works as they follow the artist’s career. Don once said: “There is no such thing as a great young artist… There are only artists with potential.”

This method allowed the Rubells to create relationships with famous artists before they made it big. For instance, they were among the first to acquire work by contemporary artists such as Jean-Michel Basquiat, Cecily Brown, Keith Haring, Rashid Johnson, Hayv Kahraman, Jeff Koons, William Kentridge, Yoshitomo Nara, Cindy Sherman, Mickalene Thomas, and George Condo.

A painting by Kehinde Wiley, the painter of Barack Obama’s official portrait, in Miami is another example of wise purchasing ahead of the curve.

The Rubells also have a longstanding connection to Washington. In 2002, they bought the Capitol Skyline Hotel, a block from the museum on I Street. Mera has been involved with the Washington Project for the Arts, a nonprofit organization that supports artists in the D.C. area.

When I visited the Rubell Museum in Miami last year, my daughter started talking to a woman with greying hair sitting cross legged on the desk in the entry area to the museum. Upon hearing that my daughter was from Washington, the woman told her that there was a new museum opening in Washington. From the proprietary way that she was talking about the museum, I suspected that this was indeed Mera Rubell. My guess was correct and so the three of us chatted for a few minutes about her new museum about to open in DC. The featured photo for this post is a picture of my daughter and her fiance in front of the Keith Haring painting in Miami.

The museum is open now, and I look forward to spending more time in it. 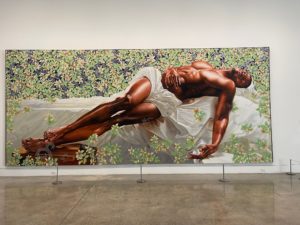