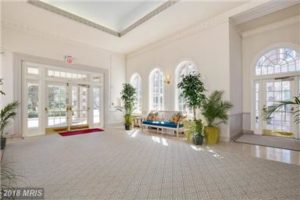 The Broadmoor is a beautiful coop building at 3601 Connecticut Avenue, which has kept its grace and charm through its nearly 90 years of history.  It was built in 1929 as Washington DC was expanding north along Connecticut Avenue.  Communities like Woodley Park were being built and families were moving in!  For those Washington cave dwellers used to life at DuPont Circle, this area seemed like the suburbs in 1929.  The Broadmoor, then a rental building, was part of that expansion and it was completed just as the stock market crashed.  Even with that untimely beginning, the Broadmoor has been a gracious addition to Washington real estate.

History of the Broadmoor

An early brochure described the building as the “home of prominent business executives, senators, representatives, Army and Navy officers, and of a select cross-section of official Washington.” Most of the apartments at The Broadmoor were available on long-term leases, but others were offered to hotel guests by the day or week. And the public facilities – most notably the dining room, known prior to 1938 as the “Silver Grill” – became a popular site for wedding receptions, school proms and other large social functions.

Amenities included a beauty shop, a barber shop, a pastry shop, a valet and laundry service

and a newsstand.  The staff included elevator operators and round-the-clock switchboard operators to handle the house telephone calls, all of which were routed through a central switchboard. The building boasted what is believed to be one of the first underground garages in any Washington apartment building.

Now it includes a gym, a play room and common area, a front desk and an on site management.

Architecture of the Broadmoor

The building, built by Harry Bralove and Edward C. Ernst, was designed by notable Washington apartment house architect Joseph H. Abel, a proponent of the “International” style. The first luxury residence on Connecticut Avenue north of Rock Creek, it was constructed on a vacant, hilly site sloping into Rock Creek Park.

The U-shaped building is approached through brick entrance gate posts by a brick sidewalk laid in herringbone pattern alongside a curvilinear brick wall. The building is characterized by projecting towers and bays leading to a brick porte-cochere. The tapestry brick facades are textured with rough bricks projecting from the surface in random patterns. The decorative elements are of Indiana limestone and vary from hand-carved heraldic tower accents to applied decorative balconies with limestone cross motifs.

The foyer and lobby areas contain an interesting mixture of different elements from different periods. The lobby, originally Tudor in style, was later changed to Art Deco in a substantial remodeling job undertaken in 1938-1939 . Fluted columns and recessed dome ceilings were added, as were Art Deco motifs, which can still be seen in the door and the wainscoting.

During World War II, when housing in Washington was scarce, rooms and baths were built on the ground floor of each wing of the building, and alcoves near the elevators were closed in to create additional rooms.

There are 194 apartments in the building, which vary greatly in size and layout. There are also five guest rooms for use by guests of Broadmoor residents.

Rent controls were instituted by the federal government during the war, and when these were not immediately removed after the war was over, The Broadmoor, like many other Washington buildings, was converted to cooperative ownership.  According to the Broadmoor website, The Broadmoor Cooperative Apartments was incorporated in 1948, and acquired the option to purchase the entire property for $2.375 million.  It was the first Washington cooperative to be organized on a membership, rather than a stock-ownership, basis. According to press accounts, more than 100 apartments were sold in the first five days after public announcement of the plan was made, nearly all of them less than a month later.

The governing documents of the corporation provide the framework for the operation of the cooperative and form, in essence, a representative democracy. Resident members meet annually to elect the Board, and each unit owner is entitled to an equal vote, despite the widely varying assigned capital values of their units.

Recent Sales at the Broadmoor.

What is Currently for Sale at the Broadmoor